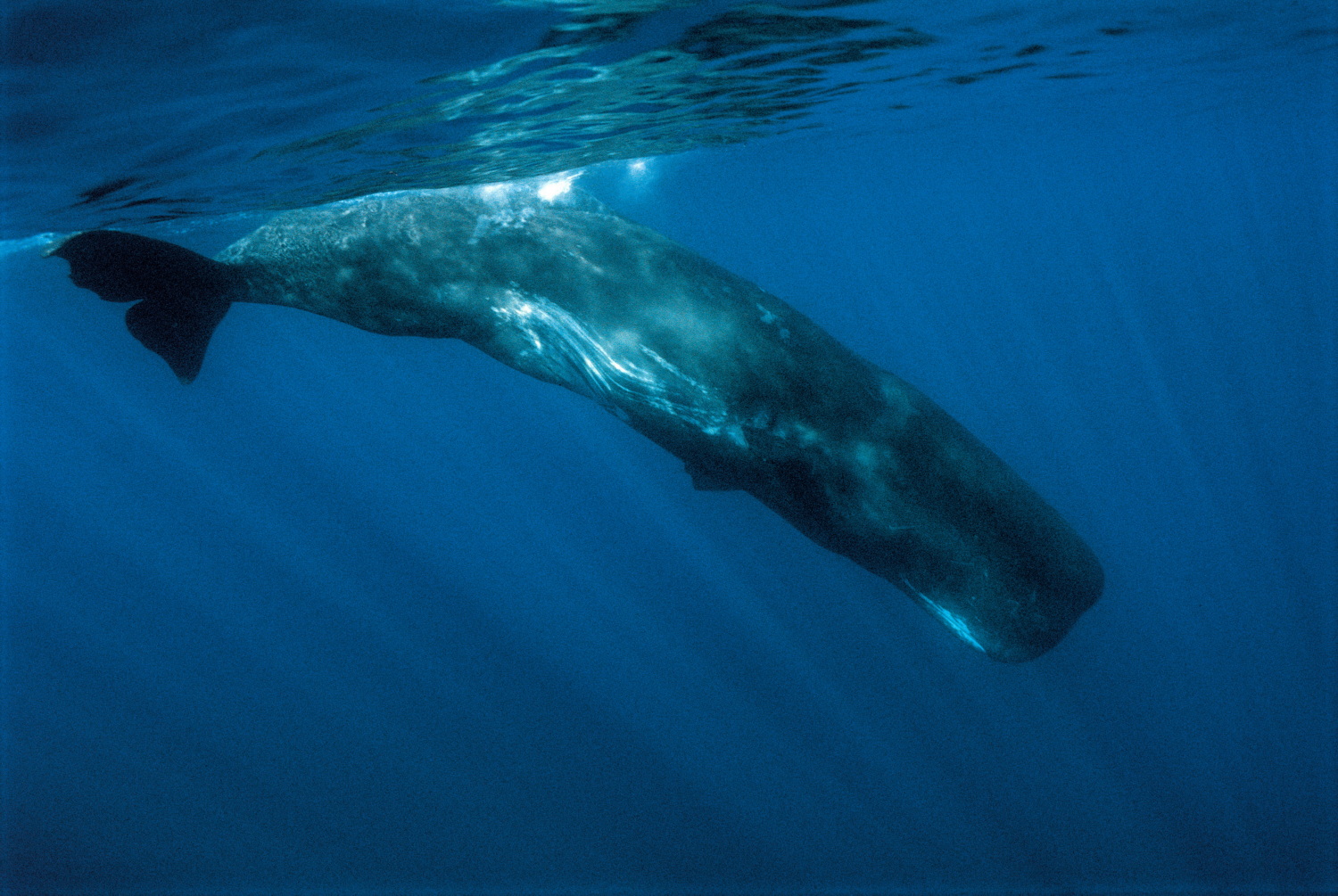 Sighting possibilities
Present throughout Mediterranean, with major frequencies on Strait of Gibraltar, the Balearic Island, the Pelagos Sanctuary area and along the coast of Ionian Greece. In Italian water, it is often sighted in the Ionian Sea and, less frequently, in the Tyrrhenian and Adriatic Seas. It frequents deep water and approaches the coast only where the seabed is particularly steed.

How to recognise it at sea
Size: males reach a length of 18 meters and a weight of 57 tonnes. Females are usually smaller: up to 12 metres by 24 tonnes.
It has a squat and robust body. The head usually occupies about 1/3-1/4 of the total body length. It is dark grey in colour, uniform and, in the mouth region, the skin is often white or speckled. The blowhole remains low and often ‘disordered’ with an oblique trajectory because the blowhole is located on the left end of the head. The dorsal fin is small and rounded, followed by numerous smaller protuberances.
Usually, when it is about to dive, it pulls its triangular-shaped caudal fin out of the water and then disappears into the depths. Sperm whales are found in deep waters or around islands and coastal areas with deep canyons or very narrow continental shelves. Only males tend to be observed closer to the Poles, even up to the 40° parallel, both south and north.

Biological notes
Mistakenly counted among ‘whales’, it actually belongs to a different taxonomic group, that of Odontocetes, i.e., cetaceans equipped with teeth. The latter are used not so much for feeding as for fighting between males. The sperm whale feeds mainly on deep-sea cephalopods, including large ones, but also on fish swimming close to the seabed. It typically dives for food at a depth of 800 metres but can go as deep as 2,000 metres, remaining underwater for an average of 45 minutes.
Females reach sexual maturity between 7 and 13 years of age, while males at 18-21 years old. Mating takes place in the summer, followed by a gestation period of about 14 months from which a 500-800 kg young is born, which is weaned and ready to feed autonomously within 1-3 years. It has a complex social structure, very cohesive and matriarchal, which manifests itself with groups each consisting of about 10 females, with their juveniles and young. The males between the ages of 4 and 21 group together and form a ‘bachelor flock’ that can be observed in the colder waters towards the Poles. Fully mature males return to the warmer waters where the females are to mate, sometimes spending only a few minutes with a group, other times several hours, before departing. The average lifespan of these marine mammals is 60-70 years.