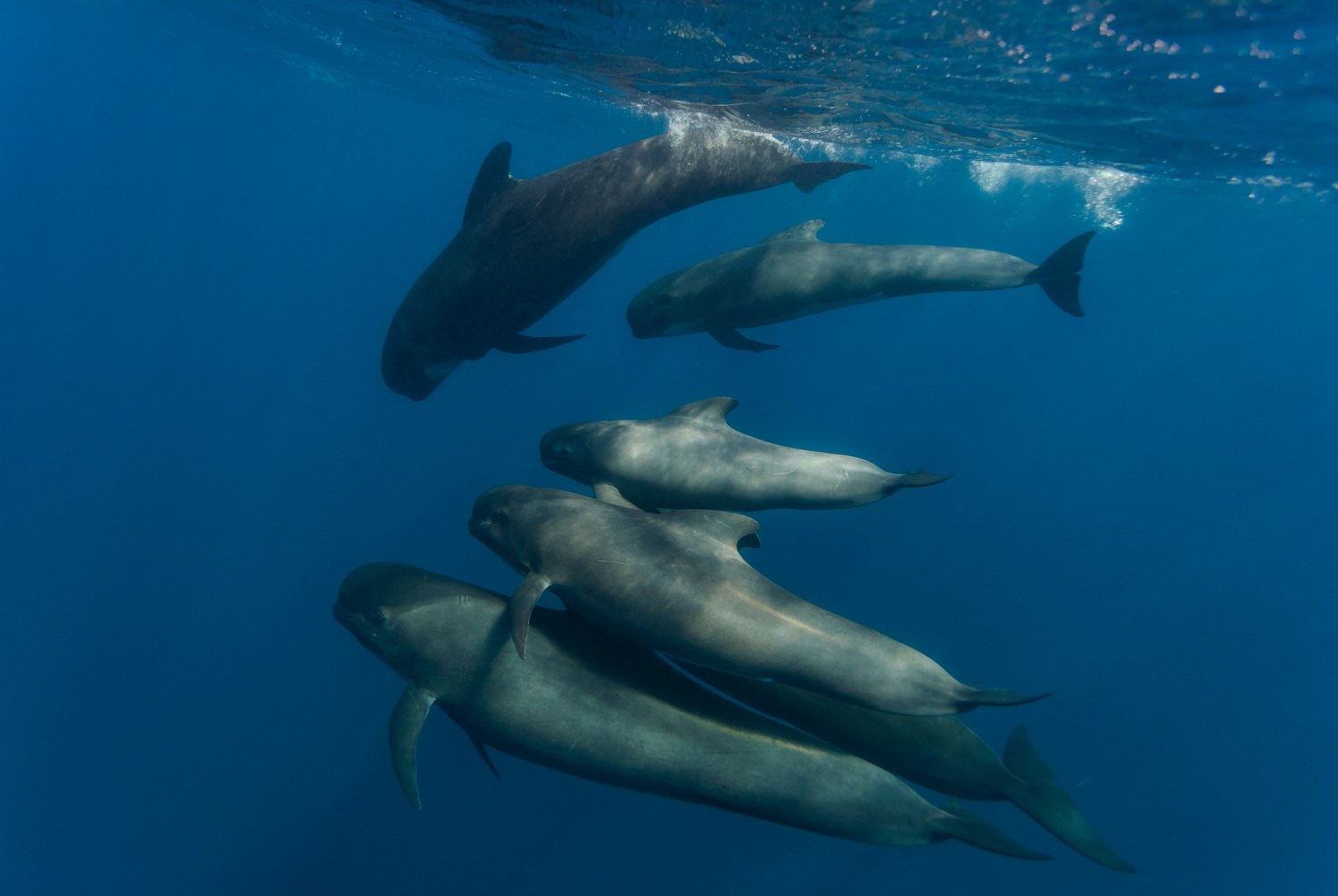 IUCN Red List: “Least Concern” (LC) at global level. In the Mediterranean two distinct resident populations are present: one in the Strait of Gibraltar, recently considered ‘Critically Endangered’ (CR), and the other, mainly found between the Alborán Sea and the western Mediterranean, which is considered ‘Endangered’ (EN).

Sighting possibilities
In the southern hemisphere, pilot whales are found in cold temperate and subpolar waters, while in the northern hemisphere they are found only in the North Atlantic and the Mediterranean. They are usually nomadic but there are also some resident populations. Although they have an oceanic distribution, pilot whales may also approach coastal areas. In the Mediterranean they prefer deep offshore waters, beyond the continental slope. It is a consistent species in the western basin of the Mediterranean: Strait of Gibraltar, Alborán Sea and Gulf of Vera. In other areas of the western Mediterranean, Balearics, Gulf of Lion, Ligurian Sea, they are sighted with some regularity. In the Tyrrhenian they mainly frequent the central-southern area of the Pontine Archipelago and the Campania coastline. Their presence in the easternmost areas of the basin is extremely sporadic.

Size: it exhibits considerable sexual dimorphism. Males reach 6 meters and exceed 2 tonnes; females, smaller, reach 5 meters and 1 tonne. Its elongated body and globular head make it unmistakable. The rostrum is very small and the dorsal fin is in a mid-forward position, characterised by a base greater than its height, with a very concave posterior margin and a rounded, curved tip. The pectoral fins are long and slender, sickle-shaped, and the caudal peduncle is very convex and narrow laterally. It is ebony black in colour, while the young at birth are much lighter. Adults have a characteristic greyish-white spot on the chest and belly, in the shape of an anchor: the ‘marres’ (the appendages of the anchor) widen symmetrically under the chin and the spindle continues across the belly until it fades into the genital area. Dives can last 10-15 minutes and its breath exceeds one metre in height.

Odontocete cetacean, belonging to the family Delphinidae. It has a very varied diet, but prefers cephalopods. Sexual maturity is reached by the female at 6 years of age, by the male at 12. After mating, which generally takes place in summer, gestation lasts about 12 months: the young at birth weigh about 70-80 kg and are 1.5-1.8 metres long. Weaning lasts almost two years (20-27 months) during which the cub learns not only how to hunt but also the rules of ‘society’. It is, in fact, a strongly gregarious species: the average of the groups studied in the Mediterranean ranges from 10 to 30 specimens. These groups are matrilineal, with the young remaining with their mothers until adulthood. Although groups consisting only of males have been seen, young male pilot whales generally do not leave their maternal group for their entire lives. Males appear to mate outside their family groups when several groups of pilot whales join together in large aggregations.
The average lifespan of these marine mammals is 40-50 years.