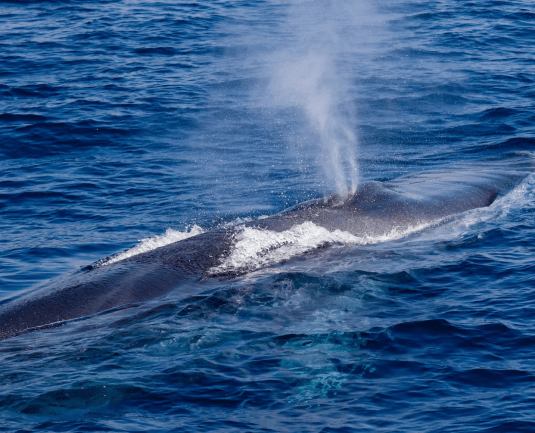 Sighting possibilities
It is found in all temperate waters of the world and very rarely in tropical and polar ones. It is a predominantly pelagic species (it lives off-shore) and can only rarely go further in-shore in search of food. During summer, it tends to concentrate in its feeding zone, while it disperses during winter. It is distributed throughout the Mediterranean, especially in the western and central Mediterranean.

How to recognise it at sea
Size: 20-25 meters in length, 70-75 tonnes of weight. Females are usually slightly larger than males. From the surface of the water, an imposing dark moving back can be seen, with a small dorsal fin on the top, very curved and displaced towards the tail. It has an asymmetric pigmentation of the lower jaw that allows its identification when swimming close to the surface: white or creamy yellow colour on the right side (extending to the tongue and baleen) and uniform grey colour on the left side. The head is V-shaped, flat at the top, with a single ridge running from the blowhole to the tip of the rostrum.
Its breath forms a double jet of vertical water spray (reaching up to 6 metres in height), visible from long distances. It generally does not show its caudal fin before diving and usually travels solitary or in pairs.

Biological notes
It is the largest cetacean in the Mediterranean Sea and the second largest in the world, after the blue whale.
It belongs to the suborder Misticeti (toothless cetaceans). Instead of teeth, it has long rows of bristles called baleen bristles, with which it filters the water. It feeds on tiny crustaceans, krill, which it catches by opening its mouth while swimming, and can consume up to 2 tonnes of food per day. To hunt it dives on average to a depth of 250 metres (the maximum recorded is 470 metres) holding its breath for 15 minutes.
Mediterranean specimens are slightly different from those living in the Atlantic and, genetically, the populations are distinct with little genetic exchange between populations.
Sexual maturity reaches around 8 years of age and gestation is about 11 months. The female gives birth to a cub every two to three years. The cub is weaned after about 8 months.
The average lifespan of these marine mammals is 85 years.